Letter Matt Kisber, Reagan Farr and LBMC About Corruption In the Tennessee Judicial System. The Courts are Used in Tennessee to Hide Fraud 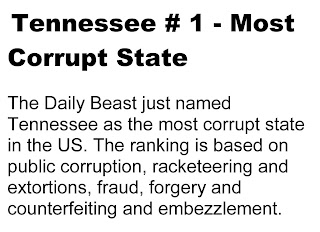 This is Sharyn Bovat I was considered the top relocation consultant in Middle Tennessee. When I whistle blew about DOE fraud, discrimination, and corruption at Nissan North America I was was bullied and harassed. Warrants were sworn out and I was jailed 3 times, a 4th warrant was accidentally put in the system after I was on local TV complaining about diversity issues in the schools, I've endured 19+ months of court appearances, a state trooper stalked me(2010), Michael Thomason of Governor Bredesen's administration befriended me and became my bridge partner, I've had death threats, Nissans circled my home, my child has suffered & a LOT more.
www.NissanWhistleblower.com
LBMC I want to go back to work and I have a class C misdemeanor on my record until I can get the #### out of Tennessee I want to be busy. Currently I'm working on a press release to ask Governor Haslam for an exoneration and expungement.
Im INNOCENT of the crime = to a speeding ticket. Basically I was on property that I was told to not go to BECAUSE I thought due to the fact the man (Dominique Thormann) who ordered the letter telling me I could not be at Nissan (the same as the man that asked congress for OVER 1 Billion tax dollars to build an electric car that insiders at Nissan told me was going to "fail" and jobs would not be created) .... since he LEFT Nissan (after I put on my blog that he was a bad spender of taxpayer money) then I thought it was OK for me to go to Nissan North America on July 7th 2010. I went to the office because NISSAN had not helped me with my references or training like they had promised after I whistle blew. In fact Nissan executives slandered me, some people were told that I was gay. Luckily I proved that was NOT true
www.sorrysilverman.com then yesterday a local said they thought I was bi-sexual. HELLO!!! The slander that happened to me was real. This is a homophobic society. What NISSAN executives that did deals with Matt Kisber and Reagan Farr did to discredit me was horrible.
Mr. Tavares a Nissan board member emailed me in February 2010 (the letter ordered by Thormann used to have me arrested was done in July 2009) and I had met with people in 2010 that were aware I might be getting a job at Nissan Motors AFTER the letter was ordered. Even in 2011 I heard from people connected to the TOP Nissan management in japan. I had a call from the head of one of Nissan's vendors in July 2011. A Corporate VP in Japan told him to call me. Why? http://www.tennesseerelocationadvice.com/
Still in February I was found guilty of a class C misdemeanor= to a speeding ticket. The fact is I was NOT wrong... I'm right. I'm a victim of selective prosecution. The DA's office NEVER should have let the judicial harassment go on so long. Nissan hired a bunch of lawyers to work on having me discredited. A former DA named Joe Baugh was used to baby sit my case. For over 19th months I fought the Tennessee courts. Maybe the NISSAN Fraud is connected to the SOLAR "deals" from Bredesen's ECD: http://www.newschannel5.com/story/17260454/newschannel-5-investigates-solar-tax-cut
The jury could NOT understand my rational: A lady in the gallery watching was wearing Nissan logowear I was RAILROADED.


Luckily MOST of America understands that I was abused by the Tennessee courts and so do MANY Tennesseans. "Educated" people "get it" they understand that corporations can be "evil (a southern word)"

In Tennessee the jury was "tainted" by the mainstream media. I've got proof.
Still I paid the $50 fine and court cost JUST to "get my life back"... Two other charges against me were dropped. One in the summer of 2010 and the other in February 2012. Those charges could have had me jailed for 11 months. Had a "new" judge NOT been assigned to my case I'd have been jailed simply for trying to protect the American tax payers. The stress I've been under knowing that Tennessee wanted me railroaded is bad for over a year I've documented my blood pressure and it's high.....
LBMC: The fact is Tennessee is the MOST corrupt state in America and Matt Kisber and Reagan Farr were involved with some "iffy" deals and because I'm a former researcher connected to the CIA they wanted me discredited. The NISSAN CEO Carlos Ghosn "most likely" did deals with Iran during Iran Contra, Senator Corkers office has taken issues of fraud to the DOJ www.EricHolderInvestigateThis.com
LBMC Ya'll gonna help me?
Sharyn Bovat
615-415-6675
sharynbovat@aol.com