The Stars of this Video-Tennessee, WCS School Board, Judge Jeff Bivins, Governor Haslam & the Buttle Opener.

My name is Sharyn Bovat I want NISSAN executives connected to Matt Kisber and Reagan Farr to mediate after bullying me for 3 years for whistleblowing.


Because I do NOT Trust the corrupt courts in Tennessee.  I'm not saying WHO I think is corrupt I'm just saying in "general" they are.

Have A Great Mothers Day!

Posted by Sharyn Bovat at 8:30 AM No comments:


The President oF IRAN Carpools in His NISSAN 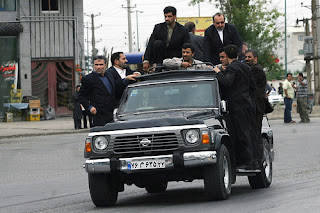 
My name is Sharyn Bovat I'm the NISSAN whistleblower: The story will break before the election. A lot of FRAUD happened and some of it is "solar" it's connected to SOLYNDRA. Investigations in DOE fraud are happening. I've been told "some are criminal".... I don't know WHO exactly. They won't tell me anything for fear I will blog about it: www.nissanwhistleblower.com

Solyndra read my blog www.GirlintheBlackHonda.com 1142 times. A few months ago a man from the Pentagon spoke to me "off the record" for 3 hours. This involves National Security

This video http://youtu.be/1U0FsbTFzpA includes Matt Kisber and Reagan Farr: The DOE gave money to a company on the Iran Watch List...Yes! NISSAN is on the list American taxpayer money and Tennessee Taxpayer money is going to fuel the Iranian economy http://www.iranwatchlist.com/node/22
I thought Andrew Breitbart might break it, now someone else will.

The NISSAN DOE loan was approved by a law firm hired by the Department of Energy... The Firm is considered an Obama bundlers.

This 2+ minute video highlights Tennessee racism, corruption and that Jobs will NOT be created in Tennessee. Each job NISSAN will provide could cost America 20 Million "each" Nissan got 1.4+ Billion and last month only sold 370 Leaf EV's sold. NISSAN is using technology is from the 90's there is dwindling demand for the car and LOTS of subsidies are needed to sell so few, it's a mess

Since NISSAN is on the Iran Watch list and has been identified doing business with Tehran they NEVER should have legally been allowed to use the Treasury bank.

It's been documented that NISSAN gives to charities that support the Muslim Brotherhood. The President of Iran drives around in a NISSAN. Attached is a picture I got from UANI (United Against Nuclear Iran).

Hundreds of millions of taxpayer dollars have been spent on Electric Car chargers that
will ONLY work on Japanese cars. All done by Steven Chu & our President...surprised?
I've sent this Video http://youtu.be/-UoKzeaCHg0 to Washington DC insiders: Says the Tennessee State Legislature knew of DOE fraud and did NOTHING to stop NISSAN from drawing down on the 1.4 Billion DOE Steven Chu/Obama Bundler approved loan. The Treasury will have another “bad debt” and America made a bad bet.

This video explains HOW I learned about NISSAN DOE Fraud in Tennessee:
http://youtu.be/OAZbwaiZ4z4

The Tennessean KNEW about the Fraud and did NOTHING... I can prove that too.
Wonder WHY Mark Silverman left the editors job?

It was Me :) http://youtu.be/rJzdz51Bpn0 I'm a bit of a bimbo BUT I LOVE America!
The Mainstream Media won't cover the NISSAN fraud to protect President Obama's Pet Project. www.SorrySilverman.com
Mark Silverman of Gannett is STILL a friend of mine, we talk almost daily when he retires he will probably write a book about all this (fyi I did work for CIA operatives in the Reagan era www.TheStealthSkirt.com I was around people connected to the Iran Contra scandal and I can say 100% the corruption in the Obama administration is FAR worse. I became a democrat in the 90's BUT I'm back in the GOP. I hope you will welcome me. www.RespecttheRINO.com Every plane has 2 wings :):)

Marsha Blackburn's office is aware: I've been emailing one of her staffers in DC with updates.
I do NOT like Lamar ALexander because he HAD to have know about NISSAN's excessive IDB debt. www.MarshaBlackburn2014.com Bob Corker is my hero for sending my information to the Dept. of Justice BUT Eric Holder's office has done NOTHING.... Surprised? www.EricHolderInvestigateThis.com

I respect your time and will not overwhelm you with emails.... just monthly updates. Life in Tennessee as a whistle blower has been HORRIBLE. I complain about "Good Ole Boys" all the time BUT when I had a death threat a Tea Partier called me up and told me he had a fully loaded arsenal and said he'll protect me anytime. To him THANK YOU!

It's been a LONG journey.

Have A Great Day!

Sharyn
Posted by Sharyn Bovat at 9:49 AM No comments:

Whistleblower Makes Video Asking WHY Tennessee Ignores Fraud.... Judges are Part of the Problem. It's How Hitler Happened.


"Worse than the Nazis were the Jews that fixed the ovens"

A Holocaust survivor told Sharyn Bovat that and later in life she went to a concentration camp and saw the homes that were 100 yards from the ovens that burned the Jews.  Those people that lived in the homes saw the smoke and they stayed silent.

A Tennessee teenager told me the Holocaust was "over publicized" many don't believe it was "that" bad.  To many teens in Tennessee Hitler is a "Hero"... I think THAT'S disgusting.  The Tennessean KNEW of inhumanity and so did executives at Gannett... I told Mark Silverman I think he's one of the Jews that fixes the ovens.  Unless people read about problems they will NEVER know they exist.

Twice I testified at the Tennessee State legislature about the judicial harassment I've received for whistle blowing and spoke of the Fraud happening in Tennessee and it was IGNORED and taxpayer money was wasted and job creation is NOT happening.

constitution, which requires that the judges of the supreme court must be elected by the qualified voters of the state, to require that judges of the supreme court or any intermediate appellate court be appointed for a full term or to fill a vacancy by and at the sole discretion of the governor based on merit; must be confirmed by the Legislature; and thereafter, must be elected in a retention election by the qualified voters of the state. Confirmation by default will occur if the general assembly fails to reject an appointee within 60 calendar days of either the date of appointment, if made during the annual legislative session, or the convening date of the next annual legislative session, if made out of session. This amendment authorizes the general assembly to prescribe such provisions as may be necessary to carry out the appointment, confirmation and retention of appellate court judges.
STATUS:  On third and final consideration, April 23rd,SJR710 passed the Senate Floor 22-9.
Senators voting aye were: Barnes, Beavers, Bell, Crowe, Faulk, Finney L, Ford, Gresham, Johnson, Kelsey, Ketron, Massey, McNally, Norris, Overbey, Roberts, Southerland, Summerville, Tracy, Watson, Yager, Mr. Speaker Ramsey -- 22.
Senators voting no were: Berke, Burks, Campfield, Haynes, Henry, Herron, Kyle, Marrero, Stewart -- 9.
On Thursday, SJR710 passed the House floor on 70-27-1.
NOTE:  As with all proposed Constitutional Amendments, SJR710 will have to be brought back after the next election to the 108th General Assembly where the exact language will have to pass by a 2/3rds vote then go on the ballot at the next gubentorial election where it must pass by 50%+1 of the votes cast in the governor's race.
Janice Johnson is Opposed to Governor Haslam's Plan: The Tennessee Constitution clearly states that the Justices of  the Supreme Court and all lower courts should be elected (not selected by a bunch of lawyers as has been the process for filling vacancies on the Appellate and Supreme Court for the past 41 years).  This legislation is attempting to change the Constitution to allow for the current process of selecting judges to be made “constitutional” by submitting a ballot initiative in 2014.  In order to amend the Constitution, a SJR 710 has to pass two consecutive legislative sessions.  Then, the  proposed Constitutional amendment will go on the next ballot for a referendum (voted by the people) to amend (or to not to amend) the Constitution.
If SJR 710 passes again in the next legislative session (by a required 2/3rds vote).  We the people will have the opportunity to vote (ratify) away our right to vote for our Supreme Court and Appellate Court judges forever.  The lobbyist for the judges are well funded by taxpayer dollars, trial lawyers and big business.  The trial lawyers and big business have a lot at stake and will most certainly fund the propaganda campaign to convince us that “merit selection” (read: trust the lawyers to choose our judges for us) is in our best  interest.
That same year, 2014, the Supreme Court and Appellate Court Justices will also come up for a retention (yes or no) vote.  A retention vote (‘yes’ or ‘no’) is not an election.  As David Barton pointed out, retention elections usually result in lifetime appointments because the people are so clueless they usually vote “yes” instead of “no” to retain the judges in judicial retention elections.  I ALWAYS vote “NO”.   A retention election is not the same as a general election as specified in the Constitution (see below).  So, in 2014, we will have the same unconstitutionally appointed judges up for a retention vote and will most likely be serving for another eight years, leaving the status quo (mostly Democrats) in place until 2022, unless, of course they retire or are removed in between time.
Sharyn Bovat is Supporting Governor Haslam’s Plan:
Bill Haslam is the first Governor that has "tried" to make the courts align with the constitution and realistically change does not happen overnight, at least he has a plan. as long as the people that live in Tennessee have a voice (they do with a state wide ballot initiative) - it's OK. Yes Janice is right about the state not honoring the constitution: What Tennessee has been doing for 41+ years is UNCONSTITUTIONAL and if people took that literally then ALL criminals in jail should be released.

What matters to Sharyn is how the COJ oversight is monitored. ALL she wants are ethical judges who have open minds: Cronyism happens with elected judges too.

Posted by Sharyn Bovat at 6:44 AM No comments: