According to the DNJ the Rutherford IDB has Issued NISSAN 4 Billion in Bonds: NISSAN Never Made a Payment: The TN Courts Harass the Whistleblower....Why?

NISSAN used a Rutherford County IDB bond as collateral for the 1.4 billion dollare DOE loan (it really does NOT make sense that the 'taxpayers' have funded collateral for a foreign company to take federal money). 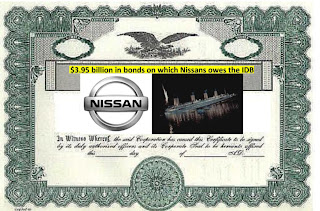 In December 2011 NISSAN got approval from the IDB to get ANOTHER $35.700,000 Million.  Why is a company whose parent (Renault) that does business with IRAN getting into so much bond debt.   I've been told NISSAN can't pay it back.  They think they'll get it "writen off."
That's not nice!
Sharyn Bovat has been blogging about wasted spending of taxpayer money for over 2 years.  She has proved that discrimination happened and wasted spending.
Still the court prosecute her....WHY?
I guess it explains WHY Tennessee is #1 in CORRUPTION

To the TN Commerce Committee:  An audit needs to be done on the EXCESSIVE IDB bonds that NISSAN is taking. They have just announced another 35.7 million.
To: sharynbovat from DNJ reporter....  Proves Rutherford IDB has excessive bond debt with NISSAN and NOW another 35.7 million.
Sent: Thu, Oct 27, 2011 10:52 am
Subject: Re: question
This story is about the $3.95 billion in bonds on which Nissans owes the IDB.
I'd have to get the contract for the 2008 bonds and look at it. The $1.6 billion
is a loan from the feds, and I'm not sure how they're paying it. That might be
another story.
It was just reported that: “The Rutherford County Industrial Development Board approved the issuance of $35.7 million in bonds to finance Nissan's auto factory upgrades. This is the 18th time Nissan has requested bonds (NISSAN has NOT yet made a payment).  Since it established its arrangement in 1982 with the IDB, which leases the factory to the Japanese automaker in exchange for the company paying property taxes at a reduced rate.”  DNJ
http://www.dnj.com/article/20111215/BUSINESS/112150306/Nissan-bonds-fund-upgrades-Smyrna
A former NISSAN employee told me to IMMEDIATLY ask for an audit....he said “cronyism is the problem..... Too many lawyers, bankers, facilitators and others have profited from 18 separate bond issues.   NISSAN is acting like the feds & they’ve created a DEFICIT that is out of control”
Giving NISSAN an 18th bond is morally wrong.  NISSAN is a foreign company and they have “not” honored the commitment  to create the jobs promised.   Is Rutherford county making “a bet” that throwing money to a private company will create jobs.  That is not smart policy.
I was told the "winners" of this IDB issue are the bond company, lawyers, and again an AUDIT needs to be ordered and done IMMEDIATELY on all fees paid for the OVER 4 billion of bonds that were reported by the DNJ.
The Wall Street Journal, Reuters, and many others have published that NISSAN is building a manufacturing hub in Mexico and spending 2 billion on a new plant.  Jobs are going to leave America for Mexico... the writing is on the wall.... NISSAN has too much unused capacity in the USA but I was told cars are 1,500 cheaper each on average to build them in Mexico.  I was also told that Mississippi Canton plant is in trouble.  NISSAN global executives have said that employees in Mexico are more intelligent than Mississippi & are harder workers.  ouch!!!
Nissan to Boost Mexico Production By MIKE RAMSEY
Nissan Motor Co. plans to build another factory in Mexico as part of a push to reach a 10% share of the U.S. auto market and expand its lead in Mexico, a person familiar with the matter said.  http://online.wsj.com/article/SB10001424052970204026804577098682509572026.html
UPDATE 1-Nissan sees new plant doubling Mexico car output-Nikkei Wed Dec 14, 2011 1:35pm EST
Dec 15(Reuters) - Nissan Motor Co will spend $2 billion to build a plant capable of assembling 600,000 cars a year in Mexico, in a move that will nearly double the Japanese car maker's annual production in the Latin American country, the Nikkei reported.
The cars will be built for AMERICA.  I’ve heard from a parts supplier that jobs are “moving” south to Mexico.
The Mexican government is ACTIVELY seeking on recruiting American auto jobs.  a parts supplier confirmed that jobs are going south.
“The Mexican government’s ProMéxico investment programme will help to create 500,000 new jobs with large automobile manufacturers, reports newspaper El Mañana”. Recruiter magazine
Nissan cannot afford to pay back money according to a person that contacted me today. I called the Tennessean and told them this needs to be on front page.
Gannett needs to expose this.
The DOE loan of 1.4 billion should be in 1st position and I was told Rutherford county homeowners (and sales tax payers) could be liable for the long term payment of the debt.
Can someone investigate PLEASE?
Tennessee legislatures I’m asking you and going to notify as many reporters as possible and I’m filing a request with the DOE and The Treasury dept. to ensure that the DOE loan of over 1 billion will be in 1st position.
As a woman that lived in California I know what happens when communities have too much bond debt.... they sink.  The Rutherford County IDB is the TITANIC.... please stop the bond issue.
ALL American’s should NOT be responsible or have their 401k’s decline for the “greedy and corrupt” behavior of the IDB.
NISSAN’s parent partner is Renault and their French and they do business with IRAN.  Rutherford County is supporting terrorist.
I love America and I’m fighting back.
Sharyn Bovat 615-415-6675
Japan/USA:Nissan to restructure IDB abatement in wake of electric cars loan
Nissan will restructure a land-lease and tax-abatement agreement with the Rutherford County Industrial Board to account for its expansion to build electric cars and batteries at the Smyrna factory, company representatives told the IDB Wednesday morning.
The auto manufacturer’s tax abatement agreement for 884 acres runs through 2022. A new contract will re-examine the ending date and acknowledge that the lease agreement will serve as collateral for a $1.6 billion loan from the U.S. Department of Energy, Nissan consulting attorney Tom Sherrard said.  “We definitely want to talk about it in more detail,” Sherrard said. He appeared before the board with three Nissan representatives who work at the company’s North American headquarters in Franklin.
Source: dnj.com
Nissan bonds to fund upgrades in Smyrna
11:00 PM, Dec. 14, 2011  |
2 Comments
Written by
Scott Broden

MURFREESBORO — The Rutherford County Industrial Development Board approved the issuance of $35.7 million in bonds Wednesday to finance Nissan's auto factory upgrades.
This is the 18th time Nissan has requested bonds since it established its arrangement in 1982 with the IDB, which leases the factory to the Japanese automaker in exchange for the company paying property taxes at a reduced rate.
"It's been a long and productive relationship," said Steve Miller, a Nissan tax manager who works at the company's American headquarters in Franklin.
Nissan every year or two needs to request bonds to reflect the company's investments to update the factory, Miller said.
"The Smyrna plant is a dynamic operation," said Miller, who is a 25-year Murfreesboro resident who previously worked at the local factory before Nissan moved its headquarters to Tennessee in 2005. "We are constantly changing operations."
In 2012, Nissan will be adjusting its assembly line operation in Smyrna to add the Infiniti JX in February. By December, the company will launch production of the Leaf electric car, and a new Nissan battery factory at the Smyrna campus will produce what's needed to operate the Leaf. The battery factory is about built, and the company will be adding the needed equipment to make the batteries, Miller said.
The latest models of the Pathfinder and Altima will continue coming off the line as well, Miller said.
By 2013, the Smyrna factory will start producing the Rogue, which is a cross between an SUV and a sedan.
While adding new lines here, Nissan plans to relocate production of the Xterra SUV and Frontier pick up trucks to the factory in Canton, Miss.
Miller said Nissan and its contractors are doing a lot of hiring to get ready to produce new cars and batteries.
"Things look good," Miller said. "We're proud to be part of the local community."
Miller said Nissan has a global presence, such as plans to manufacture the Leaf in Japan, Spain and Smyrna.
"We are competing with sister plants for production," said Miller, noting Nissan is building another factory in Brazil. "Our sales are improving. We're gaining market share. We're very optimistic."
Nissan's $35.7 million in bonds comes in two groups: a $27.4 million Series A bond that covers replacement of equipment that existed prior to 2000; and an $8.3 million Series B bond that covers replacing equipment installed after 2000.
The accounting adjustments included redemption of $588 million of Series A bonds and $38 million in Series B bonds.  (this is JUST bonds for equipment....there are OTHER bonds too previously it was stated that NISSAN had 3,950,000,000 in IDB bond debt)
The redemption adjustments involve outdated equipment that's been replaced through the years, said Thomas J. Sherrard, a Nashville tax attorney for Nissan

Nissan will restructure a land-lease and tax-abatement agreement with the Rutherford County Industrial Board to account for its expansion to build electric cars and batteries at the Smyrna factory, company representatives told the IDB Wednesday morning.

The auto manufacturer’s tax abatement agreement for 884 acres runs through 2022. A new contract will re-examine the ending date and acknowledge that the lease agreement will serve as collateral for a $1.6 billion loan from the U.S. Department of Energy, Nissan consulting attorney Tom Sherrard said. “We definitely want to talk about it in more detail,” Sherrard said. He appeared before the board with three Nissan representatives who work at the company’s North American headquarters in Franklin.