Should Tennessee Elect Judges or Continue to Select Judges 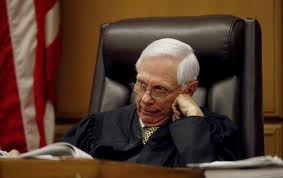 If a judge is elected then the people have the opportunity to have the judge "vetted"  and during the campaign the candidates must disclose their donors.   They must also disclose their expenses and this gives the opportunity to find out who  "favors" the potential judge. For those that value the constitution of the state of Tennessee then electing judges would honor that. Obviously there are "issues" with the judicial system     For Tennessee to become transparent it's important to give ALL people a voice in selecting judges.
.

Below was sent to the constitutes of Eric Watson:
He asked the people he represents for advice.  I thought that was "refreshing"


How should Tennessee choose those who serve as our Judges? The Constitution is clear in Article VI, Section 4. However back in 1994, a slim majority of the Tennessee General Assembly were convinced that “elected”,as stated in our constitution, could also mean “selected”. Former Lt. Governor John Wilder lead the fight for what has become known as the “Tennessee Plan”, a system that allowed judges to be appointed and then face the voters with a yes or no retention vote by the people.


This system allowed a select number of special interest groups to serve on the Judicial Nominating Commission. The commission then interviewed candidates for judicial vacancies and submitted three names to the Governor. In some cases the Governor could reject all the names and ask for a new list of candidates. In other cases the Governor was forced to choose from the list submitted.


The composition of the Judicial Selection Commission has changed over the years but most of the selection process remains in place today. Many on Capitol Hill believe it is time to literally take the meaning of the word “elected” in our state constitution and allow the people to vote in traditional elections for our judges.


Each year several of our state agencies and boards face what are called sunset provisions. In order for a board or commission to continue their existence, that entity must report to the legislature and justify its renewal of authority. The Judicial Selection Commission is set to sunset in 2012. If the legislature fails to reauthorize the commission, a key component of our judicial selection process will cease to exist. Many legal experts believe that without the Judicial Selection Commission Tennessee will again be required to elect judges as we did before the Tennessee plan.


There are some legitimate reasons to consider keeping the Tennessee plan, however, at a very minimum the State Constitution must be amended to comply with the current practice of “selecting” judges. In such a case the people must approve the change at the ballot box back. That is how our state founding fathers intended for our state constitution to be amended. One of the most repeated arguments for retaining the Tennessee Plan is that the high cost of political campaigns could corrupt our judicial system. This is a legitimate concern; however it is possible to have judges comply with a different set of campaign finance laws than typical political campaigns. A few have even proposed some type of heavy restrictions on fundraising by judges with public financing as a part of the solution. This is a radical change that must be seriously discussed before moving forward. One thing is for certain, it is time for fundamental change in the process. Our state constitution is a sacred document that we must follow, not merely pages of suggestions for governing of state. Please give me your thoughts on how we should select judges in Tennessee.

Next week I will talk about Community organizations that have help our district’s less fortunate over the Christmas Holidays. If you know about a group that has done a great job helping others please call my office at 615-741-7799