Tennessee Governor Haslam Has NOT Decided if He Wants Reform....Why?

“There’s been some controversy around the whole judicial selection process,” Governor Haslam then he says he “likes the way Judges are selected” (he said this before swearing in Jeff Bivins to a higher court) 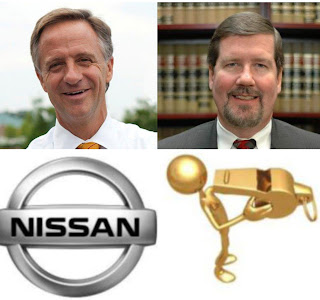 Judge Bivins is “one” of the Judges that kept the NISSAN Whistleblowers case going:  Sharyn Bovat “wants” to believe that he did NOT have time to look at the “facts” …. is that true Judge Bivins?


Last night a prominent member of the community said:


“Sharyn, you can’t change the culture in Tennessee, just settle with NISSAN and move…Sharyn literally move, the people in the state don’t understand you and they’ve made your life miserable: you know they’ll figure out a way to make you stop blogging”.    I told them:


NISSAN is avoiding my by having the courts harass me.   They want me discredited.
NISSAN “really did discriminate” internal statistics show women in management were 20.9% in 2006 and 10% in 2009 the year I whistle blew.


NISSAN “really did” take 1.4 billion DOE dollars for car that they knew would fail.
NISSAN “really does” have almost 4 billion in Rutherford County IDB bond debt: insiders at the company know their working for a figurative “Greece”.  I testified at the COJ that NISSAN employees told me of problems because the did not like seeing theire company commit fraud against America. They know the operating margins ang the IDB money will never be paid back.

NISSAN and others  profited from the creation of the 18 IDB loans know this.

NISSAN just asked for another $35,700,000 and the Tennessean knows this and STILL won't report about the excessive bonds NISSAN holds.  They won't even report that the DOE accepted the bond as "collateral" for the DOE loan of 1.4 Billion dollars.  401K owners are contacting me because they're mad.


The city of Franklin has ignored my reports of death threats, and I’ve been harassed by Nissan’s with Rutherford plates.   My blood pressure has been high for over a year:  The stress I’m under is bad.


The fact is I’m smart enough to know “I can’t change Tennessee”. All I want is FAIRNESS and to be able to work again.  I’m not a vindictive person that wants to dwell on the abuse I’ve taken for the rest of my life.  I want to “have a life”.


Tennessee and NISSAN have basically held me hostage.   I’ve been slandered by NISSAN.  The business community in Tennessee is VERY tight knit.  I started the blog to show problems in Tennessee.  A Nissan board member even approved of it.  He wanted the problems to show.


If you look at my Linkedin Profile that was created a LONG time before my arrest you would know why the blog happened.  CLICK HERE to she Sharyn Bovat's Linkedin

Also, I don’t think he wants to change that process to allow for more transparency in the judiciary.   Haslam does NOT seem to want to change the way the legislature handles the COJ investigation about “wrong doing”.   Fyi-  I voted for Haslam.


“There’s a good balance at present. There are judges and lawyers who understand the judicial process and the limits and constraints that the judges operate under.” Governor Haslam
Years the Russian KGB detained me (for a better reason that the Franklin police jailed me *3 times* FYI- I was a ‘low level’ spy for AMERICA) then in the early 90’s  I enjoyed a night at an Oyster Bar in San Francisco & even did shots of Vodka with former KGB.  Using that life experience Tennessee:


“Let’s compromise”.   I want to work with Judge Bivins & John Jay Hooker and 2 others and hash out “real solutions”.


Then take those suggestions to Mae Beavers and Eric Watson who will present an “open minded” solution to the legislature.


The time of the legislature can be focused on JOB CREATION


A panel of state lawmakers is expected to examine the Court of the Judiciary next week. But Gov. Bill Haslam said Friday he’s as yet unsure whether he supports altering the make-up of the appointed panel charged with investigating ethical complaints against Tennessee judges.


The governor told reporters following the swearing in of a criminal appeals court judge in Williamson County Friday that the state’s legislative and judicial branches could both benefit from more and better communication with one another.


“There are some people in the Legislature that feel like, are we getting adequate oversight? And the judiciary is like, I don’t think every time there’s a complaint there needs to be a public hearing because there’s so many complaints along the way,” Haslam continued. “I actually think it’s one of those that maybe… a little bit more dialogue might help the process on both sides.”


Lawmakers plan to meet Tuesday to examine the Court of the Judiciary which investigates allegations of ethical misconduct among judges.


Reports surfaced in 2009 that the board largely dismissed complaints against judges and kept most disciplinary actions secret, although court officials say that practice is generally necessary to protect judges against unfounded accusations.


Sen. Mae Beavers, a long-time advocate of reorganizing the way the Court works and co-chairwoman of the ad hoc committee reviewing the Court of the Judiciary, said she is mulling the idea of requiring that more laypersons be appointed to the board now full of judges and attorneys.


She is also a fan of electing judges, another contentious issue that promises to surface during next year’s legislative session. Judges are currently appointed in Tennessee by the governor based on a list of recommended candidates.


“There’s been some controversy around the whole judicial selection process,” Haslam said before swearing in Bivins. “From where I sit, I have nothing but good things to say about the judicial selection committee and the process. Every time, I’ve had the good problem having to choose between good men and women to fill a spot. It’s an honor to get to do that.”


The Tennessee Bar Association, like Haslam, is happy with the current set-up for electing judges, said Allan Ramsaur, executive director of the TBA. He plans on attending next week’s hearing, but says the current make-up of the Court of the Judiciary works.


“I think you have to be careful about calling change reform,” he said. “There’s a good balance at present. There are judges and lawyers who understand the judicial process and the limits and constraints that the judges operate under.”