"Baumgartner began drawing a state pension of $4,900 per month on March 11..... a day after pleading guilty to official misconduct stemming from his addiction to painkillers...."  KnoxNews.com 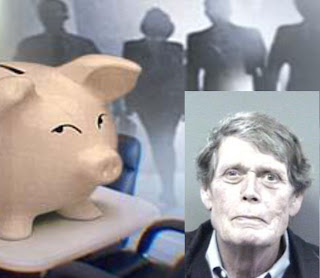 Baumgartner's pension under attack by legislators

Sen. Randy McNally and Rep. Bill Dunn have also asked officials for investigations into whether Baumgartner should face further charges and into whether the payments he authorized for defense attorneys in the 2007 Channon Christian-Christopher Newsom murder trials are valid.

Baumgartner began drawing a state pension of $4,900 per month on March 11, according to a spokesman for the Tennessee Consolidated Retirement System, a day after pleading guilty to official misconduct stemming from his addiction to painkillers.

The Legislature enacted a law after the 2005 "Tennessee Waltz" scandal that declares a public official forfeits his or her state pension if convicted of a felony involving that office.

The legislators convicted of bribery charges in that scandal were able to draw their pensions because the new law was not in effect at the time the charges were filed. The idea of the law, McNally and Dunn said, was to make sure that public officials convicted in the future would not be able to collect a pension after misdeeds.

But under the plea agreement negotiated by Baumgartner and his attorneys, the former Knox County Criminal Court judge pleaded guilty to official misconduct and received "diversion." If he stays out of trouble for two years on probation, the charges will be dropped, McNally said.

Under state law, a case handled by diversion is not considered a conviction. The word "conviction" is used in the statute on public officials losing their pension. Thus, Baumgartner is able to receive his pension for the rest of his life as things stand now.

An attorney for the retirement system wrote a letter to that effect in February of this year and McNally obtained a copy.

The upshot, said McNally and Dunn, is that Baumgartner effectively escapes any substantial penalty for his misconduct while serving as a judge while under the influence of drugs.

"I think this might be even less than a slap on the wrist," said McNally, R-Oak Ridge.

"This is obviously a loophole that gets around the purpose of the law, which is to say there should be consequences when, in the course of your duties, you violate the trust of the people," said Dunn, R-

Knoxville. "In this (Baumgartner) case, there should be extreme consequences."
McNally and Dunn said they plan to sponsor legislation that will revise wording of the current law on loss of pensions to cover guilty pleas that lead to diversion as well as to a standard conviction.

While optimistic the law will pass in the legislative session that begins Jan. 10, the lawmakers noted that it would not then directly impact Baumgartner's case. As with the legislators convicted in the Tennessee Waltz scandal, his misdeeds will have occurred before the change in the law. Courts have ruled that new laws cannot retroactively take away benefits that have already vested.

With that in mind, McNally has written a letter to U.S. Attorney William C. Killian asking that he investigate the judge's activities to determine if other charges should be brought against Baumgartner that are not covered in the plea agreement. Dunn said he has also signed the letter.

McNally said that the public release of a TBI investigation into Baumgartner indicates that other felony charges are likely warranted against the former judge. If he were to be prosecuted and convicted of such a charge in federal court, the legislator said, the existing statute would then become effective to block Baumgartner from receiving the pension.

McNally and Dunn have also sent a letter to state Comptroller Justin Wilson asking an investigation into whether Baumgartner's approval of payments from state legal defense funds to defense attorneys in the Christian-Newsom murder trials was valid, given that it is now known he was acting under the influence of drugs at the time he presided over the trials.

Convictions of the defendants in the 2007 torture slayings were recently overturned.
The legislator letter asks that Wilson, who has authority to audit and oversee spending of state funds, move to stop any payments to defense attorneys by the Administrative Office of the Courts.

A spokesman for the comptroller said Wilson declined any comment on his response to the letter, dated Dec. 1, in accordance with a policy to neither confirm nor deny whether an investigation is under way.
Posted by Sharyn Bovat at 8:33 AM