“Maintaining a high standard of judicial ethics is paramount to the public’s trust and confidence in the courts and the judges who preside over them,” Chief Justice Cornelia A. Clark. 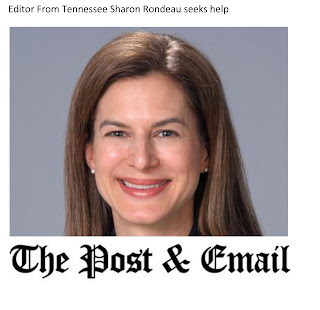 JUDGE AMY REEDY CAUGHT IN THE ACT OF HAND-PICKING JURORS?

by Sharon Rondeau (Dec. 21, 2011) — On December 20, 2011, The Post & Email reported an eyewitness account of alleged jury-rigging performed by a Monroe County, TN judge while court employees looked on. The judge reportedly chose the people she wanted, allegedly collecting much personal data about those individuals who would serve on the 2012 grand juries and trial juries.  http://www.thepostemail.com/2011/12/21/monroe-county-jury-rigging-bombshell-part-2/
To: Tennessee Leaders
From: Sharon Rondeau
Re: Proven Corruption Being Ignored


I am editor of the electronic newspaper The Post & Email (www.thepostemail.com) and have been actively investigating judicial and law enforcement corruption in your state for the last two years. I have contacted some of you by phone already.

There is smoking-gun evidence on my desk which demonstrates, without a doubt, the corruption of the judges, court personnel and sheriff's department in Monroe and McMinn Counties. These are all federally-prosecutable offenses for deprivation of civil rights (Title 42) as well as violations of the TCA. I am contacting all of the members of the TN House Judiciary Committee and Senate Judiciary Committee to find out if any of you are willing to take action against the corruption.

I have already gone to the TBI and Knoxville FBI, but they have provided absolutely no response. District Attorney General Steve Bebb's office does not return calls. I have also given the TBI credible information about the murder of Jim Miller in Madisonville on July 17, 2010, and no one has ever contacted the source or me about it and instead continue to prosecute someone who is likely innocent of the crime. The corruption is so deep that I am convinced it will take a federal prosecutor who is unafraid of the criminals to bring those responsible to account. I am determined to find that federal prosecutor if the Tennessee General Assembly does not act.

The hand-picking of grand juries and trial juries has resulted in scores, if not hundreds, of your citizens sitting in jails and state penitentiaries today who were denied their constitutional due process rights to a trial by an impartial jury. Moreover, their charges arose from tainted grand juries and were therefore illegitimate on their face. Their cases must all be retried.

I have reported the corruption to two local television stations which have done nothing. I have also called the governor and attorney general on multiple occasions, but they do not even respond. As public servants, they are failing the people miserably, in my opinion, and should be recalled for allowing these crimes to continue.

I have also called the Lt. Governor's office who is supposedly looking into judicial corruption and received no response. I have also left messages this morning with Rep. Jimmy Matlock and Sen. Randy McNally, who I am told is recovering from surgery.

The solution is not to alter the Tennessee Court of the Judiciary, but rather, to abolish it and instead empower grand juries to perform the independent investigative work to expose corruption among public officials granted to them by the Fifth Amendment to the Bill of Rights. If the groups of citizens labeled "grand juries" are nothing but a government-run club which complies with the bidding of crooked clerks and judges to issue indictments against individuals regardless of the evidence, then all of their members have violated Tennessee state law and also need to be brought to account. TCA 22-2-314 dictates that a juror cannot serve again within a two-year period, yet in Monroe and other counties, they do so repeatedly. If jury selection is done by "totally automated means," how could this be happening?

I have the documents in my hands which answer that question and am willing to testify by secure video hookup if necessary. I have hundreds of pages of evidence, testimony, and affidavits, with more people coming forward every day about the corruption.

Your committee could easily call together a special grand jury to investigate the evidence which I and others have to reach its own conclusion. Then those responsible for incarcerating innocent men and women, sometimes for life, would be brought to justice themselves.