At the Court of Judiciary many people spoke about their frustrations with the legal system. Dennis Schuelke was one of those voices at the state capital: Mr. Schuelke wrote a book and has given me a copy.  Also he had given copies to prominent members of the COJ and is available on Amazon.

It's the belief of Mr. Schuelke (and from the feedback I've gotten many others) that it's time for:
Transparency in Tennessee & in America.Click Here for Information on Getting Mr. Schuelke's Book

"Mr. Schuelke’s book ‘Attorneys Above the Law’ is a real eye opener! It points out just how the legal system is stacked in the favor of attorneys. If there is every an issue of competence or honest in dealing with their client, the client has little to no chance in obtaining any kind of satisfactory settlement in a court of law against an incompetent or dishonest attorney.” John L. Murphy U.S. Army, Lieutenant Colonel (Retired) 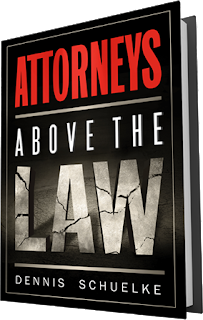 In the late 90s, Dennis Schuelke was truly living the American Dream. Raised on a farm, he had worked hard in school, landed a good job, had a great family, and saved enough money to invest in a sporting-goods company that claimed to be the next big thing. When the owners ran off with the money, Dennis hired a lawyer. And that was only the beginning of the nightmare.

Dennis spent the next eleven years trying to seek justice against the fraudulent company, and finally against his own lawyer for the outrageous miscarriage of justice in his case, to little success. Now, Dennis is speaking out about the flaws of the judicial system, calling for reform, and providing guidelines how to protect yourself if you need to use an attorney…whether you are an individual or a business.

The corruption runs deeper than you think. And you could be the next victim.


"Mr. Schuelke’s book is a must read for anyone in need of an attorney. His 14 recommendations on due diligence in selecting the right attorney and the contractual client/attorney paperwork, if followed, can literally save you thousands of dollars, protect your rights and preclude an unfavorable settlement with the attorney. Additionally, his recommendations will assure the best possible attorney for representing your needs is selected in the beginning thus avoiding the many difficulties and loss of money that Mr. Schuelke experienced".   John L. Murphy  Click Here for Information on Getting Mr. Schuelke's Book

“Express Your Opinion, I Have Mine” Dennis Schuelke author of Attorney’s Above the Law